Why Poland Withdrawing From The Istanbul Convention Will Hurt Women

Poland is to withdraw from a European treaty which aims to prevent violence against women and girls, the country's justice minister announced on Saturday. 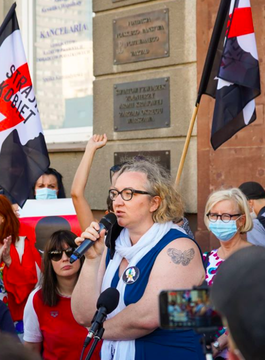 The European treaty was intended to protect women from abuse, but it has become a target for populist and nationalist leaders who claim it poses a threat to “traditional families.”

Zbigniew Ziobro said the document, otherwise known as the Istanbul Convention, was "harmful" because it required schools to teach children about gender.

He argued that the convention violated the rights of parents and "contains elements of an ideological nature" and that recent reforms introduced in the country in recent years provided sufficient protection for women.

Around 2,000 people marched in the Polish capital Warsaw a fortnight ago to protest against the move, many dressed as characters from the Handmaid's Tale while shouting "stop violence against women".

The Istanbul Convention is the world's first binding instrument to prevent and combat violence against women, from marital rape to female genital mutilation.

Justice Minister Ziobro has in the past dismissed it as "an invention, a feminist creation aimed at justifying gay ideology".

The Council of Europe said it was "alarmed" that Poland's right-wing Law and Justice (PiS) government was planning to withdraw from the treaty, with Secretary-General Marija Pejcinovic Buric condemned the withdrawal plan in its entirety.

“Announcements by government officials that Poland should withdraw from the Istanbul Convention are alarming," she said.

"The Istanbul Convention is the Council of Europe‘s key international treaty to combat violence against women and domestic violence - and that is its sole objective.

READ: These Are The Women Fighting Fascism In Eastern Europe

"If there are any misconceptions or misunderstandings about the Convention, we are ready to clarify them in a constructive dialogue. Leaving the Istanbul Convention would be highly regrettable and a major step backwards in the protection of women against violence in Europe.”

Fine Gael MEP Frances Fitzgerald said it was now essential for the whole of the EU to ratify the convention "so that no woman is left unprotected and vulnerable to violence".

The World Health Organization says domestic violence has surged this year in Europe during months of lockdown aimed at fighting the coronavirus.

Poland's ruling parties have grown increasingly right-wing in recent years, with ties to the Catholic Church stronger than ever. Hostility to gay rights was one of the main issues promoted by President Andrej Duda during a successful re-election campaign this month.

He was re-elected earlier this month following a campaign in which he described the promotion of LGBT rights as an "ideology" more destructive than communism.

In April, Polish parliament discussed a controversial proposal to tighten abortion laws in the country, as opposition politicians and women’s rights groups warn that the country’s conservative government may use COVID-19 as a distraction method to push through the legislation.

Poland already has some of the strictest abortion legislation in Europe, deeming the act illegal except in cases of rape, incest, severe foetal abnormalities or in cases where the mother’s life is at risk.

READ MORE: How Domestic Violence Survivors From Can Access 'Safe Spaces' Across Ireland