Fashion and politics have long been intrinsically linked. But now, in this age of Instagram, its potential to influence politics is more powerful than ever. 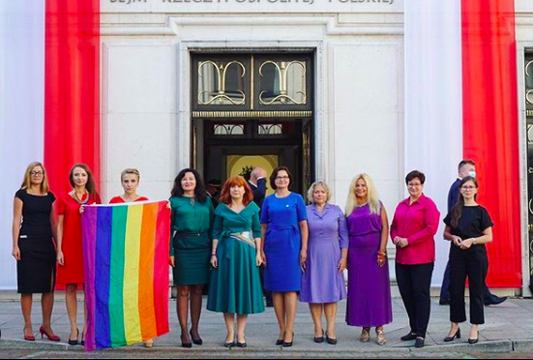 The opposition party, made of left-wing parliamentarians, took it upon themselves to harness the power of fashion for good by wearing outfits in different hues of the rainbow flag, along with coordinating masks, to show solidarity with Poland’s LGBTQIA+ community.

The colourful message was directed at Duda, who is known for his anti-LGBTQIA+ policies and has a close allyship with Poland’s right-wing Law and Justice party (PiS).

In the past, Duda's remarks when it comes to LGBTQ+ people range from “LGBT are not people; they are an ideology” to their mere presence being “even more destructive” than communism.

His beliefs reflect his policies; the re-elected president pledged to ban adoption by same-sex couples and classes on gay rights in state schools, he wishes for same-sex marriage to remain illegal and to allow for cities in his native Poland to label themselves as “L.G.B.T.-free zones" – something that has cost them EU funding.

Silently protesting this abhorrent rhetoric was the opposition party.

Clad in shade ranges sunflower yellow to deep violet, liberal Polish MPs covered their faces with rainbow masks when Duda spoke, and lifted copies of the Constitution above their heads. No words were needed.

Fashion has long been used as a vehicle for protest, most prominently in the US.

Before President Donald Trump spoke at the 2019 State of the Union, women of the Democratic party, including Alexandria Ocasio-Cortez and Speaker of the House Nancy Pelosi wore suffragette white to herald in a new era.

And in 2017, female house Democrats wore sleeveless outfits on what was deemed “Sleeveless Friday”, to promote more modern dress codes in the House.

Proud to join my colleagues for #SleevelessFriday! It's time to modernize the dress code here at Cap. Women have the right to #BareArms!

“The sight of opposition MPs wearing rainbow colours and rainbow masks at the president’s swearing-in was a welcome symbol of solidarity with Poland’s LGBTQ+ community, which was cynically vilified in Duda’s bid for re-election,” Vogue Poland’s editor in chief Filip Niedenthal told British Vogue.

“But it will take a lot more than photogenic gestures to ensure us our civil rights, which are currently under sustained attack by the right-wing regime, and public media.”

Poland's increasingly right-wing leanings have deemed it the worst country in the European Union for gay rights, according to a poll this year by the LGBT+ lobby group ILGA-Europe.

"Regressive laws, targeting both individuals and the work of LGBTI activists and NGOs, are a pernicious and real threat in many European countries," according to the report.

"In the countries at the bottom of the ranking, LGBTI people and their families' rights are actively being eroded."

READ MORE: Domestic Violence: What You Should Know About Poland Withdrawing From The Istanbul Convention

READ MORE: These Are The Women Fighting Fascism In Eastern Europe