Day Two: Here's What The Duke And Duchess of Cambridge Are Getting Up To In Ireland Today

The Duke and Duchess will spend time in Dublin, Meath, Kildare, and Galway during their three-day visit.
Irish Tatler Staff 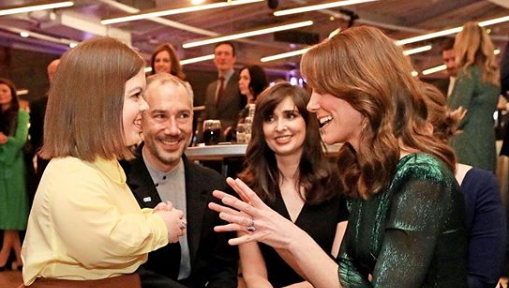 Prince William and Kate Middleton are in the building.

The Cambridges touched down in Dublin on Tuesday 3 March and will remain in Ireland until Thursday 5 March, at the request of the Foreign and Commonwealth Office.

The pair have a busy schedule ahead of them, as Kensington Palace revealed that they plan to visit counties Dublin, Meath, Kildare and Galway during their two-night stay.

Their itinerary is built "on the theme of remembrance and reconciliation", with the couple set to learn about local organisations that support and empower young people as well as those who highlight Ireland's conservation efforts.

There will be a specific focus on sustainable farming and marine conservation.

"From its thriving cities to rural communities, the program will take in Ireland’s rich culture, its impactful community initiatives and spectacular scenery. Following Her Majesty The Queen’s historic visit in 2011, the visit will also focus on the relationship between the two countries, and build on the theme of remembrance and reconciliation.

"During the three-day tour, The Duke and Duchess will learn about local organizations working to support and empower young people and projects which provide opportunities to help them develop important life skills. Their Royal Highnesses will also hear more about Ireland’s conservation initiatives and efforts to protect its environment, with a particular focus on sustainable farming and marine conservation.

"2020 will see Galway host the European Capital of Culture on behalf of Ireland – a showcase of events highlighting the richness and diversity of Irish culture, art, and sport. During their time in Galway, The Duke and Duchess will have the opportunity to experience a taste of modern and traditional Irish culture for themselves.

"Throughout the visit, Their Royal Highness will meet a broad range of people, including the President, the Taoiseach and senior political leaders, children and young people, and those working in the creative arts, business and charity sectors.

"The UK’s links with Ireland are extensive, and The Duke and Duchess are looking forward to building a lasting friendship with the Irish people."

The Duke and Duchess of Cambridge will undertake an official visit to Ireland  between Tuesday 3rd March and Thursday 5th March. The visit is at the request of the Foreign and Commonwealth Office. Further details will be advised in due course. #RoyalVisitIreland Photo © PA

On their first night in the capital, the couple attended Áras an Uachtaráin to meet President Higgins and his wife Sabina, as well as outgoing Taoiseach Leo Varadkar and his partner Matt Barrett.

They then finished their day by attending a royal reception at the Guinness Storehouse and finally turned in for the night at Farmleigh in the Phoenix Park.

According to sources close to the couple, Wednesday's royal tour will consist of the Cambridges either visiting megalithic tombs at Newgrange in Co. Meath or nearby Knowth or Dowth, or a combination of them all.

They will also visit the National Stud in Kildare, as Kate boasts a keen interest in horses, and a mental health clinic in Prosperous, County Kildare.

Other plans include a walk-around in Dublin’s Temple Bar as well as meeting children involved in the GAA.

Gardaí based in Galway also subsequently announced a number of street closures in the county, causing widespread speculation about their schedule.

While Gardaí and Galway City Council refused to confirm or deny the speculation, the Galway City Tribune understands that Kate and William will spend the day in Galway, and will visit Tigh Chóilí on Mainguard Street – as well as calling in on Salthill-Knocknacarra GAA club.

The closure notice issued stated that Williamsgate Street, William Street, Shop Street, High Street, Mainguard Street and possibly Abbeygate Street will all be closed between 6am and 2pm on March 5 – making way for the large security operation required for a royal visit.

It's understood that they are to return home on Thursday afternoon.

The Cambridges are also expected to embark on a royal tour to Australia, later this year, in the wake of the devastating bush fires.

In a message of support on Instagram in January, the Duke and Duchess of Cambridge said they were "shocked and deeply saddened" by the loss of life and wildlife in the fires.

"We send our deepest condolences to the families and friends of those who have tragically lost their lives, and the brave firefighters who continue to risk their own lives to save the lives of others," it read.

The couple's Irish visit comes as Buckingham Palace prepares to undergo a “period of transition" that will allow Meghan and Harry to move to Canada.

The Queen held talks with her family last month to discuss a new role for the Duke and Duchess of Sussex after the couple declared an intention to step back as senior Royals and become financially independent.