Indulge it, embrace it, subscribe to it.
Lindsay Woods 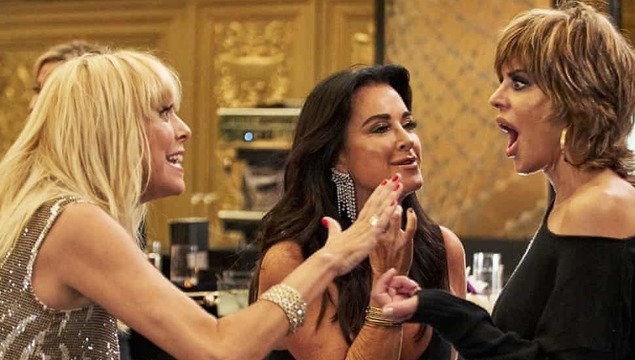 Stop passing off your love of trash television as pure irony, and embrace it for the cathartic moment of self-care that it is.

In truth, we try to carve out some quality time together at least once a month.

It affords us the opportunity to reconnect and catch up on what has been going on in our lives. I like to set the scene by slipping into something more comfortable and whipping up a tasty concoction which is a tad bit more special than our usual mid-week fare, to nibble on.

Once settled, I hit the ‘power’ button.

If you feel that the above in any way alludes to whiling away my budget offering of romance in the company of my husband over the course of an evening, then you would be sorely mistaken.

The aforementioned efforts are for my first love. A show about a couple of gals who reside in one of the most coveted and recognised postcodes o’er the land. This is not just any TV show.

This is The Real Housewives of Beverly Hills.

I do not subscribe to the notion of viewing my TV selections like that of a ‘guilty pleasure’.

Mainly due to the fact that I derive so much unbridled joy from same. In fact, one may argue that it is now my most adored hobby.

Nor do I attach any form of negative opinion by referring to my selections as ‘low-brow’. But why do I have such a predilection towards these shows? Purely because I can, for just under an hour, tune in and completely zone out.

This is the beauty of such an offering. Zero commitment. Unencumbered by the constraints of forcing my brain to concentrate and absorb the details of a show with slightly more depth than a goldfish bowl, allows me an unparalleled sense of relaxation.

The formulaic nature of the episodes is, in itself, a veritable balm.

Invariably in each instalment, at least two of the women will not be on speaking terms, there will be a lengthy dinner/barbecue/dog-naming ceremony where someone will act inappropriately, a shopping montage, a sit-down ‘heart to heart’ and a dramatic exclamation of, ‘That is NOT okay!”.

My viewing of shows of this ilk is not so I can partake in a hefty dose of reality. Moreover, it is a total escape from the demands and hum-drum of the daily grind.

It is the surreal as opposed to the real aspect that lures me in.

I mean, I don’t know about you, but the only thing running riot in my garden is the extensive weed which passes for a lawn – not a menagerie of miniature ponies with monogrammed bridles and bows in their hair.

My consumption of specific shows, as of late, is very much dependent upon my mood. For example, when I feel the weight of the sky falling and the burgeoning anxious feeling at not being able to reduce my carbon footprint at a more accelerated pace; logic would determine that I choose a show to ease the unease per se.

Nope! Instead, I reach for Netflix and one of its post-apocalyptic offerings. Normally, it will contain some contagious outbreak, a horde of zombies, an intrepid band of survivors and an underground bunker.


These are no less formulaic than the format of the storylines surrounding the women of 90210, but are still as comforting, in that they permit me to grasp at the following question: “See? It can always be worse...Can’t it?”.

My days are filled with nagging, cajoling, stuffing lunchboxes, school-runs and general ferrying of my offspring to and fro.

Have you ever run the gauntlet that is swimming lessons?

Well, let me tell you that it would take considerably less effort to shoehorn a seal greased in butter into swimming attire than having to jam a swimming cap onto my children’s heads. As a result, I consciously do not want to partake in any TV viewing that requires more of me than my attendance.

Millions upon millions tune in each week for the latest instalment in the never-ending saga that is the lives of the Kardashians.

Even the once-dominant trend of ‘ironic consumption’ – watching trash TV believing it to be rubbish to re-affirm a self-perception of being cultured but really, actually enjoying it – is waning.

Because our culture is shifting; being derisive is passé in the current climate of building each other up. Sure, we can laugh at the ludicrous antics but mocking for the sake of mocking just feels stale.

What some may view as ‘trash TV’ has, in fact, given me a great deal. It allows me to pause, to escape and to numb my brain into an almost meditative trance.

It is attainable, on-demand, there when I need it and for however long.

It neither smart-talks me or requests endless glasses of water.

Plus, my survivalist skills have really kicked up a notch and I reckon I could give that hit money-maker a run for its money...All together now, ‘Do you wanna build a bunker?!’

READ: Hey Hollywood, Not Everything Needs to be Remade With An All-Female Cast

When to commence the home spa days during lockdown number four? The...

When to commence the home spa days during lockdown number four? The...