Ruth Bader Ginsburg: Her Dying Wish And What Happens Next

Following her passing on Friday at the age of 87 due to complications from metastatic pancreatic cancer, it was revealed that Ruth Bader Ginsburg's dying wish continued along the same vein as her length and impressive career; with a commitment to justice and equality. 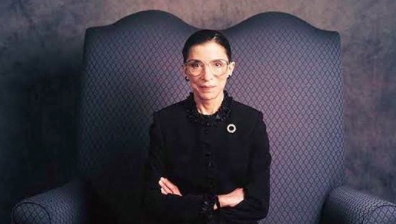 It's hard to overstate Supreme Court Justice Ginsburg's contributions to the legal fight for women's rights over the years.

During her 27-year career on the Supreme Court, she argued for equal pay for men and women, women's participation in the military, and for reproductive rights.

A lifelong advocate of gender equality, she was fond of joking that there would be enough women on the nine-seat Supreme Court "when there are nine".

The Brooklyn-native made her name during the Women's Movement in the late '60s, further demanding attention in 1971 when she made her first successful argument before the Supreme Court by filing the lead brief in Reed v Reed, which examined whether men could be automatically preferred over women as estate executors.

"In very recent years, a new appreciation of women's place has been generated in the United States," the brief states. "Activated by feminists of both sexes, courts and legislatures have begun to recognise the claim of women to full membership in the class 'persons' entitled to due process guarantees of life and liberty and the equal protection of the laws."

The court agreed with Ginsburg, marking the first time the Supreme Court had struck down a law because of gender-based discrimination.

In many of her famous cases, she was a dissenting voice on an oftentimes conservative-tilting bench. In 2014, she wrote a passionate dissent from the court's decision in Burwell v. Hobby Lobby, which allowed some companies to refuse to comply with a federal mandate to cover birth control in healthcare plans on religious grounds. She said this would "deny legions of women who do not hold their employers' beliefs, access to contraceptive coverage."

She was soon the ACLU's general counsel, launching a series of gender-discrimination cases. Six of these brought her before the Supreme Court, five of which she won.

She compared her role to that of a "kindergarten teacher", explaining gender discrimination to the all-male justices.

Her dying wish – made known by her grandaughter Clara Spera days before her death – was that her position will remain vacant until the 2020 Presidential election: "My most fervent wish is that I will not be replaced until a new president is installed."

Whether that will come true remains to be seen.

Her death will have a deep effect on the Supreme Court and, indeed, the US as a whole. It gives Republicans their long-awaited chance to entrench a 6-3 conservative majority in the highest court, which they would certainly get with another Trump appointment. This conservative-lean would almost certainly the reversal of everything from Roe v. Wade to the Affordable Care Act.

It's worth noting, however, that precedent is on her side.

When Justice Antonin Scalia died in February 2016, the Republican-controlled Senate refused to consider Merrick Garland, Barack Obama’s choice to replace him. However, within hours of Ginsburg's death, majority leader Mitch McConnell pledged to hold a Senate-wide vote to nominate her successor.

President Trump also insisted on the importance of moving quickly in a tweet he sent out on Saturday morning: "We were put in this position of power and importance to make decisions for the people who so proudly elected us, the most important of which has long been considered to be the selection of United States Supreme Court Justices. "We have this obligation, without delay!"

Speaking at a campaign rally in Fayetteville, North Carolina, the incumbent has said he will nominate a woman to sit on the US Supreme Court and will put forward the nomination next week, as a row ensues following the death of Justice Ruth Bader Ginsburg.

"It will be a woman. I think it should be a woman because I actually like women much more than men," the US president said.

With mere weeks before the election, former Vice President Joe Biden has urged Senate Republicans to delay any vote on her replacement until after the November election.

Speaking in Philadelphia, the Democratic presidential candidate said: "Voters of this country should be heard... they're the ones who this Constitution envisions should decide who has the power to make this appointment.

"To jam this nomination through the Senate is just an exercise of raw political power."

The presidential hopeful also reiterated his pledge to nominate an African-American woman to the court, which would be a historic first, if he wins the race to the White House.

While Biden's potential picks are relatively unknown, two conservative women have been named as possible Trumpian candidates: Amy Coney Barrett of the Chicago-based 7th Circuit, and Barbara Lagoa of the Atlanta-based 11th Circuit.

Barrett is a devout Roman Catholic who abortion-rights groups say would be likely to vote to overturn the landmark decision that legalised abortion nationwide, while Lagoa was the first Latina on the Florida Supreme Court and would become the youngest justice on the Supreme Court if appointed at 52 years old.

Trump has already appointed two justices: Neil Gorsuch in 2017 and Brett Kavanaugh in 2018.

Democrats immediately said they would fiercely resist any effort to confirm a justice before Inauguration Day, warning that Republicans should follow their own precedent from 2016.

“They must exhibit a shred of integrity and recognise that abandoning their word now, and breaking all precedents by ramming a nominee through — most likely after the election — would cause the nation tremendous pain,” said Senator Patrick J. Leahy, Democrat of Vermont.

The resistance to a confirmation of this kind would be extreme and all-consuming, with Bader Ginsburg – nicknamed 'RBG' by followers – considered a liberal icon for the modern era.

Mourners gathered on the Supreme Court steps the evening she passed, many with signs featuring Justice Ginsburg’s most memorable quotes. But the conversation was never far away from what comes next. “Honour her wish,” the crowd chanted repeatedly.

A number of senators have come out and said that a replacement would be unlawful, with moderate Republican Senator Lisa Murkowski of Alaska (a key swing vote in the Republican-controlled senate) remarking hypothetically that she would not confirm a new justice until after the presidential inauguration in January 2021.

READ MORE: The Family Of Breonna Taylor – A Black Woman Fatally Shot By US Police – Will Be Paid $12M In Settlement