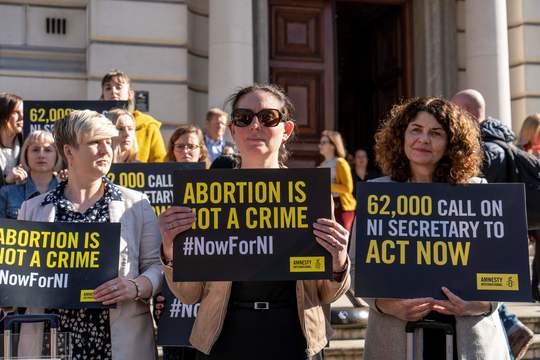 Northern Ireland is home to some of the strictest termination laws in the world.

A report published today by the United Nations Committee on the Elimination of Discrimination against Women has reiterated its previous findings that restrictive abortion laws in Northern Ireland are in breach of the UK’s international human rights obligations.

The UN Committee called on the UK Government to change the law to decriminalise abortion and to provide greater access to abortion for women and girls in the region.

“This report from the UN confirms what Amnesty has long said - Northern Ireland’s abortion laws are a daily violation of the rights of women and girls," Grainne Teggart, Amnesty’s Campaigns Manager in Northern Ireland, said.

“The UN Committee is very clear that it is the UK Government which has responsibility for ensuring that our laws are in line with the state’s international human rights obligations.

“Devolution – even when functioning – does not relieve the UK Government of their responsibility to uphold human rights in Northern Ireland. We call on the UK Government to introduce abortion reform legislation at Westminster without any further delay.”

Among the concluding observations of the United Nations Committee on the Elimination of Discrimination against Women, following its examination of the UK’s rights record, it said:

“The Committee welcomes the introduction of a scheme in June 2017 to enable women from Northern Ireland to access abortion services in England without having to pay.

"However, the Committee deeply regrets the continued failure of the State party to implement its previous recommendations, as well as the recommendations following its inquiry under article 8 of the Optional Protocol of the Convention finding grave and systematic violations of women’s rights in Northern Ireland to ensure women’s access to abortion services, including by decriminalizing abortion, on the grounds that abortion is a matter for the authorities in Northern Ireland to consider.

“With reference to paragraph 8 of the present concluding observations, and noting article 33 of the Belfast Agreement or the Good Friday Agreement of 1998 which provides that the Westminster Parliament shall legislate as necessary to ensure that the United Kingdom’s international obligations are met in respect of Northern Ireland, the Committee urges the State party to implement, without further delay, the recommendations contained in the Committee’s report following its inquiry under article 8 of the Optional Protocol to the Convention.”

READ MORE: The Creator Of That Savita Mural Is Exhibiting In Atelier Maser