These Are The Women Fighting Fascism In Eastern Europe

People say Ireland is similar to Poland in a lot of ways.
Kate Demolder 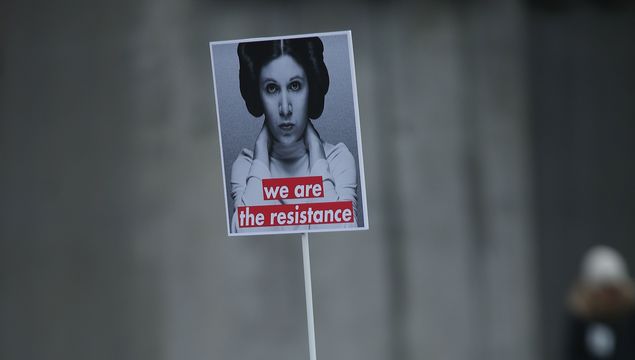 "No," Beata Geppert, one of 14 Polish women who continue to protest against the rise of fascism in Poland, said.

"It used to be like Poland, but not anymore. Poland is much more Catholic."

On 11 November 2017, during the Independence Day march in Warsaw, 60,000 far-right protestors gathered calling for a "white Poland”.

Determined to counter-protest and make their voices heard against racism, fascism and hate, Geppert, Izabela Mozdrzén and 12 others stood peacefully with a banner saying Fascism Stop. They were met with violence and intimidation. 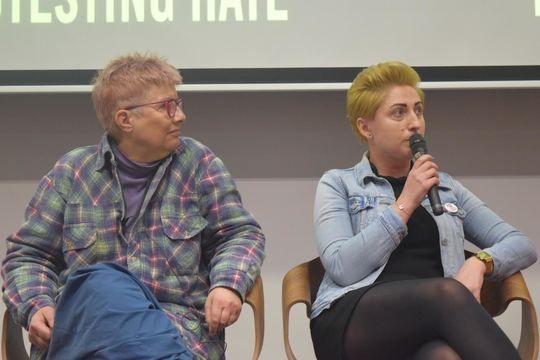 "After maybe 30 seconds they started pushing and pulling us to the ground. They then started to beat us, to kick us in the back, to spit on us, to insult us with really really bad words," Mozdrzén explained.

"And luckily, security guards surrounded us and protected us. Without that, I don't know what would have happened."

Twelve months later – during the centenary march of the country's independence – the far-right All-Polish Youth, a co-organiser of the march, posted a video of an EU flag being set on fire on the march, as some people chanted “down with the European Union.”

Despite being attacked the first time, many of the women attended the march a second time, "but the violence this time was worse and the fascist groups were more organised."

Poland today appears to be the antithesis of its own post-transitional success. Once a powerhouse of democratic institutions and liberal change, it is now slowly descending into a mafia-like state. 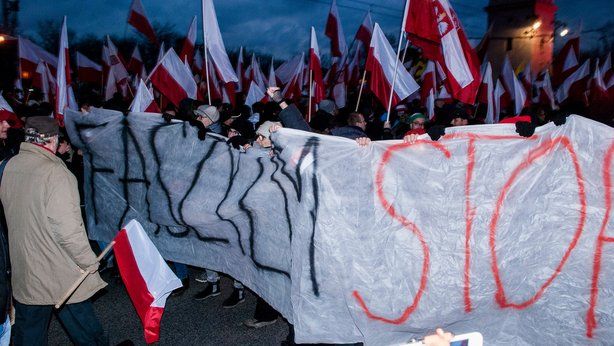 On Wednesday, Poland's ruling conservative Law and Justice party passed a law, called Stop Pedophilia, which criminalises the promotion of underage sexual activity in any way – including the teaching of sexual education.

The law also promotes the teaching of pro-life values in schools as well as abstinence and the evil of contraception use.

It is now scheduled to go to a parliamentary committee to discuss specific ways it will be implemented.

The Stop Pedophilia Project is promoted by the Polish pro-family group Ordo Iuris (OI) which continues to be under attack from leftist organisations who label it an "ultra-conservative Catholic fundamentalist network."

Despite leftist protests, Poland is still a largely Catholic country with many of its citizens agreeing with more Christian-based legislation.

In September a law was shelved after massive public outcry when the mayor of Warsaw attempted to implement an aggressive document introducing LGBT themes to young school children in city schools.

It included classes on homosexuality, bisexuality and transsexuality, in effect implementing the World Health Organization standards that include encouraging early childhood children to touch and sexually gratify themselves.

In 2015, the nationalist, social-conservative and Euroskeptic Law and Justice party (PiS) won an outright majority in the national elections with 37.6% of the vote — something no Polish party has achieved since the communist collapse.

Under the guise of tackling corruption, the party has introduced reforms in a bid to take control of Poland’s courts.

It beckons the question that – should Ireland's population and geographical location to the USSR had been bigger and closer respectively – would this have been our fate? 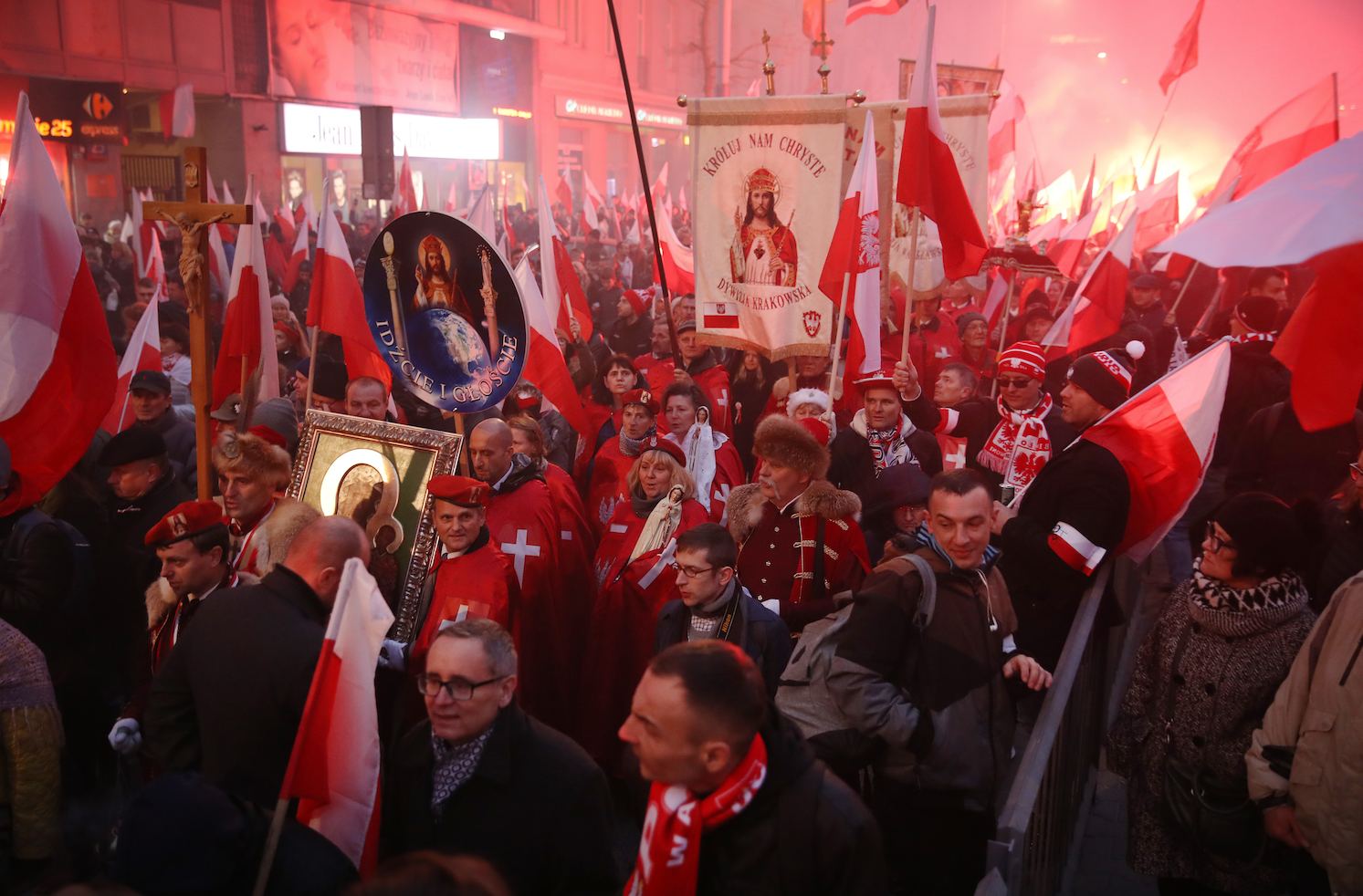 Both Geppert and Mozdrzén are in Dublin this weekend to address Amnesty International's annual conference and the hate-fuelled alt-right march which saw placards bearing racist slogans such as “Islam = terror” “pure blood, clear mind" and “Europe will be white or uninhabited”.

They say they are determined to tackle the far-right movement head-on.

"I wasn't scared until I saw the movie of us," Geppert revealed.

"There were people shouting awful things and the smell of vodka was in the air and people were throwing firecrackers from the crowd onto the police. Things started getting more and more brutal from there."

These women are under violent attack for fighting fascism in #Poland.

New Zealand Prime Minister Jacinta Ardern received global praise this week following her calling of a global fight to root out racist right-wing ideology – something these women strive ardently to do.

Marches in London, Vienna and India have formed in solidarity with the women as well as thousands of letters of support.

Both women praised the young people of Ireland for their tremendous take on politics and social injustices – especially following the abortion referendum which itself has been put in jeopardy by far-right fascism in Poland.

However, both agree that without their help, nothing will change.

Polish society is becoming increasingly divergent between the liberals and the conservatives and right-wing nationalists, making it difficult to predict who will win upcoming elections.

The outgoing head of Poland’s electoral commission has warned that planned changes to the commission would undermine its independence and represent a step back towards communist times.

Wojciecj Hermelinski, who retires this week, said that the changes — which allow politicians, rather than judges, to appoint the bulk of the committee’s members — risked carrying unwanted echoes of Poland’s authoritarian past.

“I see this as a return of the electoral commission to the times of the [Soviet-era] Polish People’s Republic, because then the commission . . . consisted of representatives of political parties,” he told newspaper Dziennik Gazeta Prawna.

“This time they won’t be party members, but in a certain sense they will be people who are linked with them, whether mentally or in some other way.”

READ MORE: What Exactly Is A Circular Economy And How Can It Save The Planet?