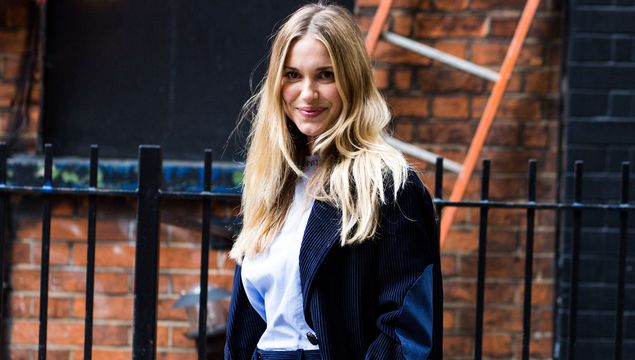 A curated work wardrobe = more time in the morning and less decision making (without sacrificing your style). Liadan Hynes road tests the work uniform with some interesting results.

We've all been there. Standing in front of a packed wardrobe willing it to spontaneously answer the perennial question: ‘What am I going to wear?’ Increasingly, women in careers without prescribed dress codes are choosing to ditch the daily struggle to reinvent the sartorial wheel, in favour of deciding on a look that suits them and buying it in bulk. Most famously, Saatchi and Saatchi art director Matilda Kahl wrote an article for Harpers Bazaar titled “why I wear the same thing to work every day,” in which she described her work uniform of silk white shirts and black trousers.

Of course, for men, a work uniform is the norm. No one sees a man in a suit and thinks ‘there’s a person sadly conforming and giving up on their individuality’. Steve Jobs, Mark Zuckerberg and Karl Lagerfeld are all famous for their signature work uniform. Obama wore the same grey or blue suit everyday in office, to reduce the number of decisions he had to make. For men, such homogeneity isn’t seen as a weakness, but rather a strength, an outward sign of the single-minded determination they bring to the workplace.

Women, as per usual, can’t win. An interest in clothes is often seen as shallow, while abandoning fashion in favour of a work uniform might be seen as a sort of copping out, a denial of self-expression. When Kahl adopted her uniform, she was asked if she had joined some sort of sect.

In fact, there’s a freedom in a uniform. Donna Karan championed this sort of thing with her Seven Easy Pieces capsule wardrobe in the eighties. Now we have Eileen Fisher’s eight-piece The System, and apps like Cladwell, which helps whittle your wardrobe down to thirty pieces. Swedish blogger Elin Kling, whose line Toteme is the ultimate celebration of the paired back, Swedish aesthetic, says, “I have always been very strategic when dressing. I love the idea of creating a uniform.”

Adopting a uniform is about knowing what works for you. “Black is my uniform,” says designer Jennifer O’Dwyer of leather label J.O.D. who mixes her own pieces with vintage cashmere from A Store is Born. “If I’m shopping online, it makes it easier; I just filter for black. I always buy in bulk, especially trousers; if you find the holy grail of jeans or trousers, brilliant, buy three pairs.”

What to wear? The everyday gets easier

When deciding on a uniform, ignoring trends, being strategic and erring on the side of classic is advisable. Louise Stokes, owner and buyer for Loulerie jewellery boutique, developed her signature look during her years in New York. Her work uniform consists of skinny pants with slouchy jumpers and blouses, or long skirts. “If I’m on a buying trip I’m twelve hours on my feet, but then I don’t have time to change,” she explains. “So I would wear a skirt with a Lucy Nagle sweater and boots, and then for the evening, I have a little Anine Bing cami underneath my sweater…For me, it’s all about time; I’ve edited my wardrobe.”

Inspired, I took the plunge and spent a week road testing a uniform of my own. I am a writer and stylist so a typical day can involve anything from working at the dining room table, to meetings, shoots, playdates with my toddler, and the gym. I called my uniform The Jeanne, inspired as it was by French IT girl Jeanne Damas. Jeans, a blouse or t-shirt, and a grey blazer, worn with ankle boots with a mid height stacked heel, seemed like it might cover most eventualities. I’d allow some leeway, I decided, in the form of dressing it up, or down, with shoe changes and an outer layer of a khaki parka because, January.

First off, mornings felt that bit easier. Anything that lends more time to the daily routine of wrestling a toddler through the get dressed/eat breakfast/assemble playschool paraphernalia is a bonus. I found that with the rest of the look decided, choosing a top becomes more of a pleasure than a stress. A uniform didn’t feel limiting, or boring, instead it felt calming.

Never have I made more use out of my accessories. Vintage belts, earrings bought but not yet worn, the many clutches gathering dust on a wardrobe shelf, all came out to play. While men may have it easier a lot of the time, we will never suffer the indignity of resorting to adding personality to our work uniform with a novelty sock.

Whittling your look down to one solid theme suddenly means a lot of the hangers-on in your wardrobe suddenly become screamingly obvious, and at the end of the week I undertook a massive, deeply satisfying clear out.

So did I stick to it? Not exactly – I have a passion for mid-length floral dresses that will not be denied, so they, with a leather jacket, have become a sort of second uniform option. But I ditched a sizeable portion of my wardrobe, and rarely, if ever, now stand fretfully gazing into what is now a much more streamlined closet.

MORE! Spring fashion buys you can actually wear in the Irish spring weather